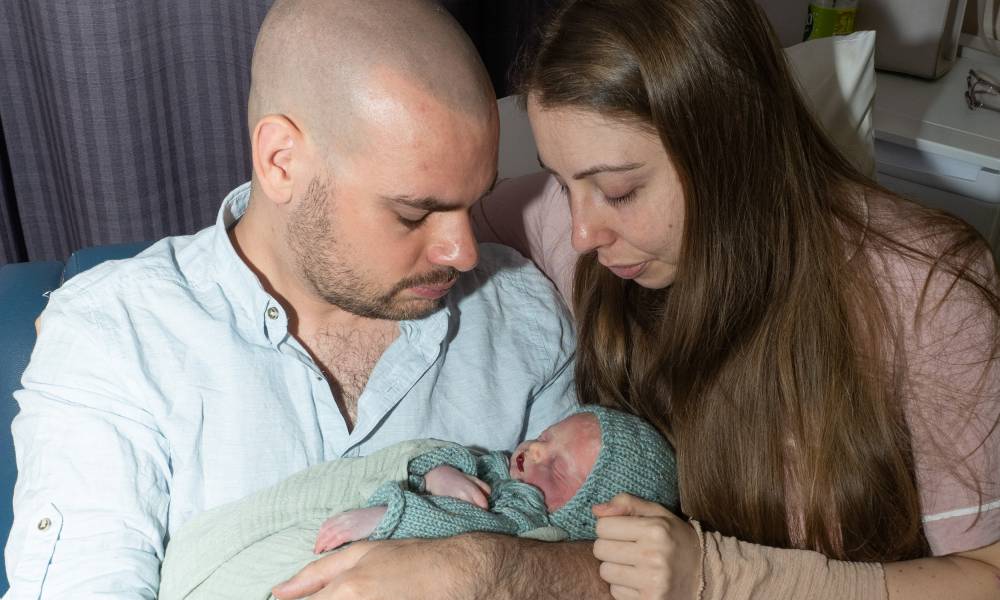 After my husband Darren and I got married, we found out that it was going to be a little harder for us to conceive than we originally thought.

We went down the fertility assistance path and through IVF got pregnant on our first transfer with our little boy, who we named Avery Vittorio Macolino.

The months that I was pregnant were pure bliss. We were so excited and spent months planning his arrival, decorating his room and having everything ready for him. He was the first grandchild and nephew in our family and he was so very much wanted.

At 13 weeks pregnant we found out Avery had an umbilical cord abnormality, called marginal cord insertion. I felt terrified and a shiver ran down my spine when I read the ultrasound report that said ‘risk of fetal abnormality and stillbirth.’

We were reassured by our doctor that this was ‘no big deal’ and that everything would be fine. I was told that I did not need extra monitoring despite this umbilical cord abnormality.

Avery never stopped moving in utero, he moved so much that it was so uncomfortable for me and he would kick me so hard in the ribs. The day before our little boy was born was just like any other. I was 35 weeks pregnant and finished washing his clothes, put his car seat in the car, and went off to my maternity photoshoot.

However, it suddenly occurred to me that he hadn’t moved much that day. I didn’t think much of it. I thought ‘maybe he has run out of room, or maybe he’s having a sleep.’ I went to sleep that night so happy. I had no idea the very next day I would wake up to the worst day of my life.

The next morning I woke up and he was not moving at all. I went to the hospital for a reassurance check. The nurse put the doppler on my belly and his heartbeat did not come up like it always had. She called another nurse into the room, and then my doctor. I then knew that something was very wrong and was bracing myself to receive the worst news of my life.

My doctor told us to come down to his office. I knew then Avery was dead. He did an ultrasound on me and I was told those awful words, ‘there’s no heartbeat, your baby has died.’

My husband collapsed into me. I couldn’t think or breathe. I wanted to die too. Nurses came into the room and started taking blood from my arms. I was still in complete disbelief and shock that this was really happening.

I was put to sleep and had a caesarean section. I went into hypovolemic shock. I was completely grey, freezing and shaking uncontrollably. When I woke up, I begged my husband to tell me that this day didn’t really happen, and that it was all a dream. He just kept saying it was real and we were both crying uncontrollably.

I was given my little boy. I was shaking so much that I couldn’t even hold him properly. All I remember is how perfect he looked. He looked like he was just sleeping. I wanted so desperately for him to just open his eyes and take a breath, but he didn’t.

I wanted so desperate for him to just open his eyes and take a breath, but he didn’t.

I was then moved into the maternity ward where Avery laid next to me in a cold cot. I listened to babies crying in the rooms around me. I just stared at the ceiling all night wondering what had gone so wrong.

We were able to spend two precious days with Avery, taking in all of his gorgeous features. His curly blonde hair and cute button nose. Leaving him was the hardest thing we have ever had to do.

Having to walk out of the hospital with an empty belly, leaving my son behind, and knowing I will never see him again was the most gut-wrenching thing I’ve ever done. I never ever thought I’d need to plan a funeral for my child.

We chose to have a full autopsy and testing on Avery and my placenta. Avery’s cause of death was determined as a combination of the marginal cord insertion and a condition called chronic villitis, which restricts nutrient flow through the placenta by causing inflammation. It was not detected and in the third trimester, my placenta could no longer sustain Avery. I had no idea I was in a high-risk pregnancy and still struggle with the ‘what if’s.’

Losing Avery has made me more grateful for everything I have.

I realise that life is fragile and can be taken away in a second. I don’t take anyone for granted. It is not guaranteed that they will be here tomorrow. Losing Avery has been the greatest pain and grief I’ve ever experienced. He has left a legacy though. An unbreakable marriage, a closeness with many family and friends and a fearlessness you get from knowing life can’t throw much worse at you.

Now all I can do is try to look forward and hope that one day I can have a living child. They will never replace Avery, but I hope they can carry some of his spirit into the world.