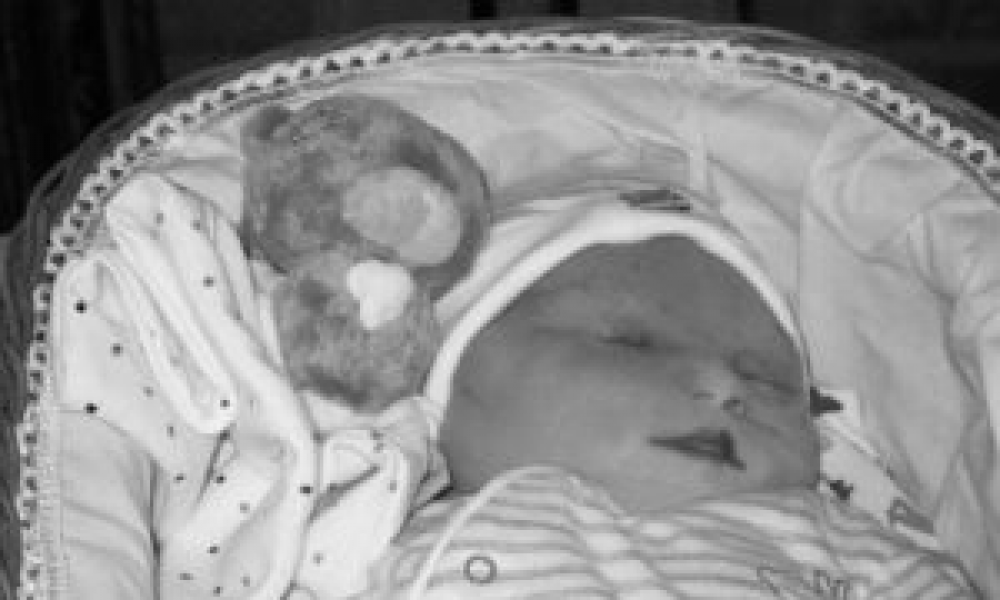 A worry free and symptom free first pregnancy to term (I had had an early miscarriage a year before) and on our check-up on the due date, 30 June 2011, the midwife was unable to find a heartbeat. Our baby had died. It was such a shock.

I had felt a wild movement from the baby on 28 June but had thought nothing of it at the time. In hindsight this was probably the moment of struggle and the moment he died. We later found out the placenta had partially come away from the uterus. I had no bleeding and no other symptoms or pain at all. The day in between 29 June, I did have a heavier feeling than before but again just assumed it was normal for a full term pregnancy. We even went for a long walk to help induce labour. After the midwife told us, we were sent to the hospital to confirm what we already knew… our baby had gone. I was sent home to process this and the next day I was given a pill to start the cervix ripening process and on Saturday 2 July I was admitted to hospital and the induction was started. On the evening of Sunday 3 July at 9pm Jamie was born naturally after an epidural and a long 2 hours of pushing as well as an episiotomy. He was put on my tummy and I held him for a long time. My baby boy… how did this happen, disbelief. Waiting for his eyes to open and to hear his cry but this never happened. He stayed with us that night in hospital and was taken for a postmortem the following day. Luckily after a postmortem on the placenta they found it was a partial loosening of the placenta that was the cause and no postmortem was required on Jamie. This was a relief, he was taken to the funeral parlour as my husband did not want to take him home with us (this was the worst decision of my life and the one thing I will always regret) I had to then go and see him every day and this took a huge tll on me mentally but also physically and my recovery was increased significantly by this. Also of course a funeral had to be planned, the last thing you expect to be doing after welcoming your baby to the world. The hardest thing in the world of course saying goodbye to your baby for the last time ever!!! We had a lovely service and had him cremated and I bought a beautiful painted box for his ashes. We keep him at home so he is always with us. We got pregnant first cycle after we were given the all clear. It was what I needed at the time to deal with the loss of Jamie. I focused on this new rainbow pregnancy and saw the midwife many many times and called with any and every worry and had scans for reassurance whenever I needed it. I felt fully supported but was never actually able to enjoy the pregnancy. I was induced at 37 weeks and Hollie was born healthy and crying with her eyes open in April 2012 so 9 months after Jamie died. I suffered another miscarriage after that but we were blessed with a baby boy at the end of 2014. It was an enormous journey… emotionally, physically and psychologically. At 14 weeks of my final pregnancy I suffered quite a heavy bleed… At that point I closed myself off and said that if we lost this one then that was it… I could not cope with trying again physically but mostly mentally. I just couldn’t do it!!! Thank goodness I carried to term and he was induced at 38 weeks as well. They are now 3 and 5 and my gorgeous rainbow babies!!! A relief that the emotional journey is over. Blessed with our 2 babies we always talk about their big brother Jamie up in the sky with the stars… it is so hard mama’s but to hear the cries at the end.of the long journey it makes it all worth while.I found an online Facebook group of mama’s dealing with the same loss as me at the same time a lifesaver… only they understood everything I was going through and every single up and down you have going through the grief period and subsequent pregnancies.

Jamie is always with us and I have always talked about him to Hollie and Benjie so they are aware of his existence, they have seen his photos and we see him as a white butterfly so when they see a white butterfly around, they shout out that Jamie is here.

As writen by Jamie’s mother, Louise.